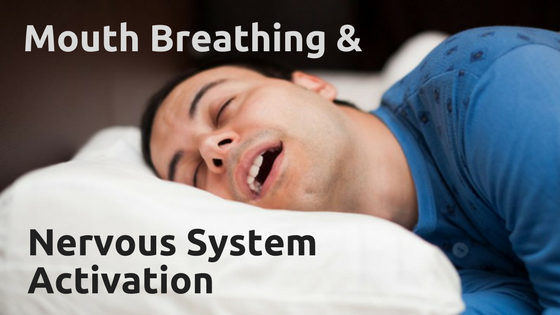 “The mouth is for eating, the nose is for breathing”

The sympathetic component controls the delivery of oxygen and nutrients to virtually every organ, including the brain and every structure of the musculoskeletal system.  But without the Parasympathetic Nervous System for balance it can overwhelm the system with an over abundance of energy causing dizziness, spaciness, confusion, fear, anxiety or other forms of hyper arousal and distress.

Controls glandular activity throughout the body, secretions in the lining of the intestines, many regenerative functions (such as activity of immune cells & hormone production), the vocal chords, several muscles of mastication and swallowing, and appears to stimulate the secretion of those neuro-modulators that are responsible for our emotions.

The breath is an important regulatory mechanism for these branches of the nervous system.

Historically, mouth breathing is essentially an emergency function, needed to respond to acute stressors, such as going into battle, hunting, or defending territory.  Commonly called the “fight or flight” response, it causes blood to rush from the digestive system, the brain, and other organs that are not essential for that particular moment, and sends it to the musculo-skeletal system to enable fast, reflex movements to avert threatening situations.  Now days, this response is engaged when preparing to give a speech, facing a fear, driving in busy traffic, or even simply meeting new people.

Mouth breathing commonly uses accessory muscle of the ribs to fill the upper and mid lobes of the lungs, but rarely utilises the lower lobes.  This causes less oxygen transfer to the blood and therefore poor delivery of nutrients to the tissues.  The upper lobes have a high concentration of SNS receptors, which become activated, ready to rise to an approaching stress.

Nose breathing on the other hand is a passive function, requiring no extra muscle activation, but instead uses the diaphragm to pull air deep into all 3 lobes of the lungs.  This area of the lungs has a high concentration of PNS receptors to balance SNS activity.

Interestingly, nitric oxide, a gas needed for blood pressure regulation, fighting bacteria & viruses, immune health, pain reduction, energy production, and other beneficial functions, is produced in high amounts in the nose.  Therefore nose breathing increases available nitric oxide.  This is especially beneficial for those with MTHFR A1298C genetic polymorphisms, who may have trouble producing nitric oxide.  Breathing through the nose leads to a 10-15% higher oxidation of the blood, meaning you get more oxygen in your blood by breathing through your nose.

Those who sleep with their mouths open, snore, or need to use a CPAP machine for sleep apnoea, spend much of their night in SNS dominance.  This can cause poor oxygen delivery, fibromyalgia, exacerbation of asthma symptoms, bad breathe, worsening of anxiety levels, increased blood pressure, diminished smell, postural changes, fatigue, poor sleep quality, and increases risk of mortality. 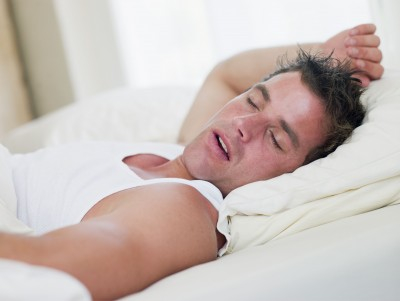 Yoga breathing is called Pranayama. Pranayama means “to control the breath”, or “mastering the life force”.  Studies have been done to show improved oxygenation of blood and PSN function with this form of breathing, and in particularly providing different results depending in which nostril is used.

Regulation of the Breath to Balance the Nervous System

If you’re a mouth breather when you sleep, the best way to train yourself to breath through your nose is to tape your mouth shut. This is called the Buteyko breathing method.  You can buy Leukopor tape (2.5cm) from any Pharmacy.  It’s a porous, lightweight tape that is very comfortable and will not damage your lips when u take it off in the morning.  You can tape your mouth horizontally, or vertically.  If it’s your first time, you may want to vertically tape one side shut so you can gain ‘emergency’ air if needed.  Once you feel comfortable, completely seal your lips to achieve the most beneficial results.  There are numerous studies highlighting the effectiveness of the Buteyko method in asthma.

Clinically, I have seen anxiety disappear, blood pressure normalise, blood sugar levels normalise, and the obvious greater improvement in sleep quality.  What do you have to lose?  Give it a shot!